The new technologies of CRISPR is revolutionizing the way in which we investigate the function of gene mutations and variants in disease. Although CRISPR is commonly used to edit the DNA code of the genome, CRISPR has also been adapted to permit changes in gene expression. Using these systems, genes can be upregulated (CRISPR-activation: CRISPRa) or downregulated (CRISPR-inhibition: CRISPRi) experimentally.

Since it is becoming clear that many disease-associated genetic variants alter the expression of gene, having a robust technology allowing these changes to be modelled in the laboratory would be very advantageous. We have established CRISPRa and CRISPRi systems within human induced pluripotent stem cells (hiPSCs) by imbedding the necessary machinery for targeted gene expression changes in hiPSC lines.

The next challenge is to see whether the system is still functional once the stem cells have been differentiated into heart tissue and thus optimize protocols for the experimental manipulation of target gene expression in human cardiomyocytes. With this technology in place, we hope to explore the function of regulatory DNA in cardiac disease and to establish new protocols of stem cell differentiation into specific subtypes of cardiomyocyte. 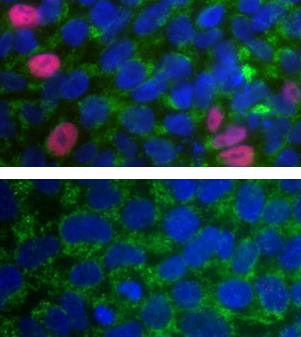